Yesterday, I drove out to Hookipa to look at the surf. From Baldwin Avenue around the old men’s home, you could see the whole coast was closed out, with surf crashing over the outer reef. 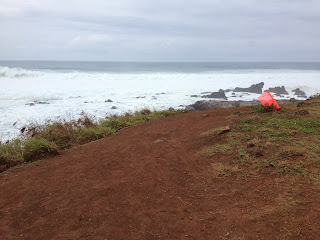 The picture doesn’t show it very well — iPhone cameras weren’t made for that.

It was the heaviest surf I’ve seen in several years, though nowhere near as big as I’ve seen it a long time ago. The big sets came intermittently, and the crests were far apart. At its biggest, Hookipa surf comes in tightly bunched and crashes hard enough to make the ground shake.

Wednesday was nowhere close to that. But it did come quite early in the season.

There’s been some blather about global warming in connection with the typhoon in the Philippines, part of the promised more and bigger storms. You sure can’t prove that by Maui (or by measuring Accumulated Storm Energy worldwide, either).

It rained hard at Kahului Airport Sunday; set a record that doubled the old record for a short period. It wasn’t raining hard Upcountry, and I didn’t realize there was a downpour Downcountry or I’d have rushed to see whether the intersection at Hana Highway and Dairy Road flooded.

That intersection used to flood two or three or more times a year, and become impassable every other year or so, a serious matter since that’s how you get to the airport from the tourist areas. One time in the late ’80s, I forget which year, there was a three-day storm that closed off that intersection for days, cutting off East Maui from West and South Maui.

The alternative way along Hansen Road flooded, too, and that was closed. I reported that East Maui was completely cut off, although it is possible that in a truck you could have gotten down Amala Place, through the airport and out along Haleakala Highway to Hana Highway. I didn’t try it, and it wouldn’t have made a difference in the big picture anyway.

My story in The Maui News made a big deal of the fact that if the state closed Haleakala Highway north of Hana Highway, which it was proposing to do as part of the runway extension, flooding at Dairy and Hansen would truly cut off East Maui any time there was a moderate rainstorm. (Ed Tanji, then reporting for the Advertiser, thought I overreacted; he believed Hansen Road had been closed by a rookie cop who didn’t understand the situation; but he was kind enough not to say a malihini reporter had misunderstood, too.)

Gov. John Waihee, trying to soothe the furor over the runway and flush with $500 million from Duty Free Shoppers that could be spent only on airport projects, ordered Haleakala Highway rebuilt around the end of the runway, which never was extended. Nowadays, if you wonder why the road wanders around in the fields and requires you to make three mysterious dogleg turns, it’s because John Waihee wanted to keep me happy.

Later, as part of the development of Kmart and other big box stores, the intersection of Dairy and Hana was rebuilt. (It was raised, so that the cross-streets flood now in a heavy dew.)

The point (and I do have one, though it has taken a while to get to it) is that after the intersection was raised, it stopped raining. Whenever I saw Warren Unemori, who designed the road, I’d ask him if he was sure it would handle a big storm, and he always smiled and said he was sure it would. But for more than 20 years, until Sunday, it was never tested.

So, whenever the alarmists say we are going to have to weather more and bigger storms, you can’t prove it by me.

The Dairy-Hana intersection stayed open, so Warren was right.